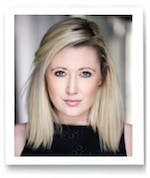 Melissa Johns is best known for playing Imogen Pascoe in ITV’s Coronation Street and Sadie in BBC’s The Interceptor. She was born and grew up in Herefordshire and moved to London in 2009 where she attended East 15 Acting School. One of very few aspiring actors with a disability to be accepted into drama school. Melissa was born without her right hand and forearm. Having this body that was so different to everyone else’s has made achieving her dreams incredibly difficult, but she has never given up on knowing exactly what she wants and where she wants to be.

During her time at Drama school, Melissa was chosen to represent East 15 during award season and went on to win one of the most prestigious awards to be won. She was one of the first physically disabled actors to win the award. As well as Coronation Street and The Interceptor, Melissa other TV credits inculde Doctors, Casualty, SILK. Melissa has recently finished playing Emilia in the Lyric Hammersmith/HOME's production of OthelloMacbeth. Other Theatre credits include One Flew Over the Cuckoos Nest at Sheffield Crucible, The Prize at Live Theatre, Take Back:Our Bodies at Contact MCR and Graeae productions.

Melissa is an ambassador and campaigner for actors with disabilities, breaking down the barriers faced by disabled actors and changing perceptions of disability. She has recently won the JCI UK Ten Outstanding Young Persons Award for working to break the mould in getting disability on screens and stages and running workshops for young people to allow them to see the importance of working with people with disabilities in order to try and evoke positive social change in society’s approach to disability.

She won the Highway to Well Fitness challenge based in LA for her work in shedding a positive light on disability in fitness. She has recently started working with modelling organisations to inspire a change in disability and body image.

Melissa’s message to audiences come from a very personal and driven place. Use what makes you different. Magnify it. Glorify it and use it to make the changes that you want to see. She is also Ambassador for Invisiyouth Charity and also for Models of Diversity.

Melissa has achieved the following variety of awards and nominations.

"I asked Melissa Johns to speak at our Sunshine Radio Awards evening earlier this month (Nov). I had no idea of the content of her speech before the evening but asked her to speak for 20 minutes to a room of 180 people. She gave such a heart-warming speech talking us through her life from when she was born through to the present day and how she overcame her disability through grit and determination, despite some pretty awful negativity from many people. She made the speech light-hearted and I could feel the room warming to her right from the start. When she finished, she received a standing ovation.

I have received many emails from our sponsors and people receiving awards alike, saying how inspirational she was and how much they enjoyed listening to her."

"Melissa worked tirelessly at the Royal Free Hospital Children's school with some of our most vulnerable and at risk young people. She showed empathy, care and rigor in all her work, providing valuable Emotional and academic support. By wearing her own disability so lightly she is an outstanding role model , demonstrating for young people with significant barriers of their own that a positive response to challenge is always possible. Melissa was also particular interested in young people finding their own voice and developed our use of multimedia advocacy during her time with us."

"My daughter has attended many of the workshops that Melissa Johns has held. Melissa may have a disability but the children don't see that, they see a young lady, helping them make a difference to their lives, be more assertive and confident, she encourages them to work together in a group. Melissa is inspirational and each and everyone of the children look up to her as a fantastic lady and a perfect role model. Melissa takes time out of her busy life to set these workshops up and encourages each and every child to reach their full potential and individuality, to which they are extremely grateful. Melissa's drama workshops are packed full of fun, laughter, and highly entertaining, a lady who truly deserves to be recognised for her hard work and dedication."

– Jane Phillips, Parent of young person involved in a workshop​