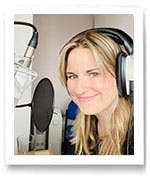 Lizzie is a BAFTA nominated Voice Actor, playing characters in over 1000cartoon episodes in shows aired across the globe.

Other Movies and shows Lizzie has lent voices to include Bob the Builder (USA version), Cbeebies Alphablocks, and the recently EMMY nominated Mush Mush & The Mushables. She also starred in the British stop motion feature film “Strike”, as Mungo-the mole with a goal.


With a personal BAFTA nomination in 2019 (Best Performer) and a passion for language, Lizzie speaks at numerous events about her voiceover career, offering advice and techniques to budding actors.

She is currently working with BAFTA Kids alongside mental health charity Place2Be, encouraging young people to have fun with their voice whilst they learn a new skill.

"Lizzie gave an amazing workshop and presentation to the school which was the highlight of our Book Week. Lizzie's story, her description of the work that goes into creating a character and her ability to connect with pupils of all ages makes her an outstanding speaker for junior and senior schools alike. Her effervescent personality, sparky approach and enthusiasm carries the session along and includes the pupils also developing their own vocal talents.

A brilliant workshop presented by someone many of the pupils know and can relate to through her cartoon work. I can highly recommend Lizzie for your school."

"We were lucky enough to have a visit from Lizzie on 2nd November 2021 as part of our Aspiring Authors Writing Week. Lizzie spoke to the children in all classes from Y1 to Y6 and was engaging with each class. Children had the chance to ask questions and Lizzie explained how she got into the world of being a voice artist. The children really enjoyed hearing the voices that Lizzie performs as part of her job. Each session with Lizzie was packed with fun, enthusiasm and was inspiring to all. Lizzie emphasised the importance of using our talents, whatever they may be, to inspire us in our future careers. Quite a lot of children were trying out different voices after the session, inspired by Lizzie’s talk. I would highly recommend Lizzie as an engaging speaker for your school."