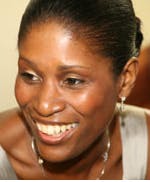 Laura left school at 16 with hardly any qualifications as she was dyslexic, which was rarely picked up during the late seventies and early eighties. However, she always knew that she had a learning challenge, but this was only officially recognised seven years ago.

When Laura left school she worked in a busy solicitors’ office, as a clerk typist. However she felt so unfulfilled and wondered if she would be there for the rest of her working life.

She chose to leave, having been offered a place at college to study the NNEB-Certificate in Nursery Nursing. After successfully completing her qualification, Laura worked as a nursery Nurse. Within a year her manager at the nursery recommended that she step into the role as deputy manager as she had leadership qualities.

She went on to manage a few nurseries, as well as working for Ofsted, who regulate nurseries. After Ofsted, Laura lectured at a local college, working her way up to Head of Curriculum.

Whilst working as a lecturer, she also worked as a part-time freelance trainer of nursery and school staff, and also childminders.

In 2006, she set up Childcare Consultancy which delivers early years/education training and consultancy across the UK and internationally. She is frequently asked to be the key note speaker at conferences. She writes for the sector press and advises the government on early years issues.

Her other and most important role is mother to two amazing boys, aged 19 and 15.

She has felt constantly inspired and her motto has been that you can achieve anything with hard work and passion!

"I am so impressed with your very speedy response regarding the promised documents – thank you so much for sending all this information. I have to say that this was one of the best training sessions I have been to for a long time – I really like the way you reference all your points to other publications and you leave it up to us to decide the best way forward – armed with a very comprehensive array of information. Your delivery was sustained shared thinking at its best and I would like to thank you for getting my thinking cogs going with regard to this change of practice! Rest assured, my team and I will be sourcing future training from you and I will recommend you to colleagues within Sutton. I’m all for pointing out excellence when I see it! Many thanks once again."

"I would highly recommend Laura."

"Laura is extremely professional with a thorough approach that really helps pinpoint any areas to work on."

“Dear Laura, Thank you for being such an inspiration. You have been like a breath of fresh air.”