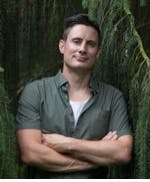 Jules is a UK-based wildlife expert, zoology correspondent, author, science-writer and broadcaster. He writes regularly for The Guardian, BBC Wildlife Magazine and contributes regularly to the BBC. Jules is also an accomplished speaker, regularly giving inspirational talks about humankind’s place in nature to large festivals and science conferences in both the US and the UK.


A zoologist by training but soppy animal-lover at heart, Jules has been researching and exploring the human relationship with animals for more than a decade. His many adventures include expeditions to track the world’s rarest invertebrates, hand-rearing threatened spiders and releasing them back into the wild, and shouting up for, of all things, frogs and toads and the people that love them. In 2014, Jules began an odyssey into animal reproduction ( Sex on Earth, Bloomsbury) investigating how sex evolved on Earth and whether animals (particularly pets) feel love like we do. More recently, Jules has focused on the topic of death ( Death on Earth, Bloomsbury) attempting to understand how death has influenced nature over millions of years and contemplating, as a human, what it feels like to perhaps be the only creature in the known universe to be aware of our own impending doom. In 2016, Death on Earth was nominated for the prestigious Royal Society of Biology book prize.

Jules’s thoughtful brand of science communication (“half stand-up, half-science” say Bloomsbury) has seen him become a “go-to” voice for lively and inspirational talks about wildlife and pets. National Geographic called him “refreshingly self-aware” and a man with "...self-deprecating charm and genuine enthusiasm..." (Boston Globe).

Jules is a UK Ambassador for Science, and has worked with more than 100,000 young people in the past five years. He is a Patron of the national wildlife charity, Froglife.

There is more about Jules, including latest news and video clips from recent events and shows here.

“The teacher's feedback from the sessions was fantastic! The teachers said his knowledge and enthusiasm for the subject was really impressive. He had a great rapport with the children of all ages and his resources were brilliant. We would be more than happy to welcome him back any time."

“This was one of the days when I actually wished OFSTED could be present to witness the awe and wonder. The pupils loved the sessions. Jules had them captivated.”

“This was a fabulous experience for all our children and staff. Jules was extremely knowledgeable, was very well organised and developed a fabulous relationship with the pupils very quickly. It was one of the most exciting things our children have experienced this year (and staff!). It was excellent! We will definitely be booking your services again.”

“Both children and adults had a great time, it was brilliant. We also had smiles on our faces all day and the children talked of nothing else. So much so that afternoon lessons were ditched to do lots of follow up work from the session. I don't think I've seen them that enthused about anything before so well done Jules!”

"I would like to take this opportunity to thank you on behalf of the students, parent and staff at Corby Business Academy... as I glanced around the many faces during you address, I could see that not only where they youngsters fully engaged but the rest of the audience were listening intently to what you were saying and I have no doubt that you have left our students with much to think about as they move forward in their education and further beyond - who knows, there maybe some budding wildlife experts in the making who have been inspired and motivated by your passion for frogs and other creepy crawlies!"