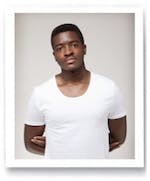 Guvna B, at 26 years of age, is a MOBO award winning, rap artist from London. Known for his positive, energetic and inspiring themes, his most recent musical release SECRET WORLD was the UK’s highest charting ‘clean’ rap album in 2015.

Guvna B, a Business & Journalism Graduate, has a positive message that is current and relevant to today’s world and is consistently at the cutting edge of urban trends. In creating output, he draws from personal experiences and observations he has made living in and around the gritty and fast-paced streets of London.

Courage and boldness not to follow the stereotypical trends of young people today has led to many doors opening for Guvna B. This has allowed him to share his views on youth culture and society whilst retaining the essential ability to deliver excellent positive workshops. A talent that has been acknowledged not only by a growing fan base, but by national broadcast media stations such as BBC, Sky News and Capital Xtra, who are constantly airing his songs and his story.

Guvna B’s stage presence is proven. In addition to performances at The O2 Arena and Wembley, thousands in Asia, Africa, Europe, Australasia and North America have witnessed his performances and inspirational assemblies and workshops.

“I didn't start life too well but I managed to turn it around. My upbringing inspired me to want to make a positive impact. The negative things I saw around me inspired me to do better and inspire people to be the best they can be instead of becoming stereotypical products of a negative environment” explains Guvna B.

"One of the best communicators we've worked with. He has the ability to connect with people from different walks of life."

"Our young people love it when he comes in. To have someone that is a very gifted speaker but also has a cool musical gift that relates to young people is really special. The difference he has made in their attitude towards school is undeniable."

"It's incredible to see young people's faces light up when he walks into a classroom. He is relatable and relevant and very skilled."

"Guvna B was great. He communicated with both students and staff in a very relatable way about respect for others and having faith in yourself. I would be happy to recommend Guvna B to anyone considering booking him."