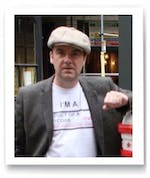 Awarding winning Charity Founder, author of the book 'Product of a Postcode', Gary talks about the importance of education in a young life and the road to being a winner!

Gary Hutton talks of being a product of a postcode about his life growing up in the East End of London using his life's path as a tool for learning as he is product of his circumstances. Gary is a survivor, growing up violence and crime is all he knew and school was somewhere to go to eat as they was giving away free food. No one told him the importance of education in life, or even why he was going to school, it was go to school or your go in a children's home. He was in one of them and didn't want to go back.

Gary has been advising MPs on youth crime and violence, as Gary is the man in the know when dealing with street life and knife crime and gang culture drugs and so on. Some of his experiences were not on the right side of the law - but to him it was the norm and along with his wits he survived, a street wise kid who knew no different.

This is a story of a young boy who was taught how to steal by the one person who should have been his role model and mentor - which eventually ended up with Gary being imprisoned playing his part in major crime in this country. Gary did what he does best and survived, but struggled deeply with what had happened in his world of dysfunction growing up, being one of 11 children all being under the age of 15 and dealing with loss heartache as his mum passing away when Gary was a small boy.

He is now a man who does his best to help steer young people in the right direction any way he can, through mentoring and talking to young people heading down the same path he found himself on in his younger years. These talks are primarily given in schools and PRU’s (Pupil Referral Units). He also talks in young offenders prisons with the aim to help guide those on the verge of being lead on a path of crime and violence, giving young people a renewed sense of self-worth and highlighting the pitfalls and how to deal with peer pressure, gang culture knife crime, drugs and more. Gary's talks are hard hitting, but his ability to ‘connect’ with those in his company ensures he manages to strike a chord and plant seeds of change.

Not many could say they have lived such a life packed into his life's path but through all this, Gary has gone on to become an author, and a speaker in schools. In 2014 he founded his own Award Winning Charity, 'Product of a Postcode' and is now writing his second book all this for a young man who left school without the one thing his knows now is thee most important tool in life! That being education as it's the key to life.

"Gary gave an inspiring talk to our pupils about his story and life lessons he had learnt along the way. He delivered great messages to pupils; respecting education, understanding peoples circumstances and doing what you can to help your community. Gary's talk works to break down preconceptions and shows more sheltered pupils how tenacity and a drive to succeed can overcome any obstacle."

"The pupils talked about previous sessions and spoke to other students in the school about Gary, his story and some of the work that had been happening. This level of sustained engagement (5 weeks) was a challenge for the majority of pupils but the delivery method kept them engaged throughout. This gave the project an opportunity to embed the learning process around role models and positive/negative influences. This had a far greater impact than a stand-alone session could achieve"

"Gary Hutton and his wonderful charity Product of a Postcode has been in to the library at Feltham young offenders a few times now and his talks are always interesting and inspirational. Gary has a way with the students and gets them on-board firstly by sharing his own story from childhood to becoming an adult, covering his own time spent being incarcerated"

"I was lucky enough to be involved in a project in Feltham YOI being run by Fulham Football Club Foundation that Gary was delivering on. I was so impressed by his story that I shared it with other agencies within the prison and as a result Gary has now delivered over a dozen of his workshops. He has been involved in our Football, Rugby, Library and Education programmes. The library has made ‘Product of a Postcode’ readily available for loan and has been very well received by inmates and staff"