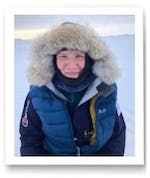 Antarctic Scientist, Polar Explorer and the first woman in the world to ski across Antarctica alone

Felicity Aston is the first and only woman in the world to ski across Antarctica alone. The 1744km, 59-day journey completed in January 2012 also made her the first person to traverse the continent purely by muscle power without the aid of kites or machines, earning her a place in the Guinness Book of World Records. In 2015 she was awarded the Queen’s Polar Medal for services in Antarctica and was appointed MBE for services to Polar Exploration.

Trained as a Physicist and Meteorologist, Felicity’s first polar experience was as a scientist with the British Antarctic Survey. Based for three years on a remote research station on the Antarctic Peninsula, her job was to monitor climate and ozone. Since then she has gone on to create and lead her own expedition teams including an international team of women who skied to the South Pole in 2009, a team of women from across Europe and the Middle East that skied the last degree to the North Pole in 2018, the first British women’s crossing of Greenland, a 700km winter crossing of Lake Baikal in Siberia, a 35,000km expedition in a Land Rover Defender to the Pole of Cold (the coldest inhabited place in the world) and an adventurous expedition in Iceland for young people with a brain injury. She was also part of the first, ever, all-female team to complete the Polar Challenge, a 500km endurance race to the magnetic north pole, and has completed the notorious Marathon Des Sables, a 150-mile foot race across the Sahara.

Felicity has been elected Fellow of the Royal Geographical Society (with IBG) in London and is a Fellow of The Explorers Club in New York. When not on expedition, Felicity has written three books about her experiences in cold places and has presented two series for television with the BBC.

Felicity is an experienced speaker, regularly presenting lectures for the Royal Geographical Society and the Royal Scottish Geographical Society, including the annual Children's Lecture in 2016. Her talks introduce the Polar Regions, memorably illustrating life in Antarctica or the Arctic as a Scientist or Explorer as well as sharing her passion for the wildlife, the history and the environment. Often her talks focus on a specific expedition, allowing the opportunity to explore themes of teamwork, leadership, motivation and achievement in addition to a snapshot of some of the most extreme experiences on Earth.

As well as talks, Felicity provides workshops that allow a subject to be explored in more depth and can also contain interactive elements including enabling students to try actual clothing, equipment and rations from real polar expeditions. All of Felicity's presentations are accompanied by stunning expedition photography and film footage.

"Thank you so much for the talk, I heard so much about it and the work the children have produced was just fantastic! Thank you for inspiring our little people."

"The girls in my Politics class this morning said that yours was the best lecture all year – and I certainly agree with her verdict! Not only was it terrifically engaging, but it had a really important message for our young women. It was absolutely brilliant! I can see now why you were recommended so highly..."

"If one of the requirements of education is to produce in pupils a sense of awe and wonder you succeeded beyond reasonable expectations. There were times that I felt I was almost living and enduring the extremes of Antarctica with you, so graphically did you tell your tale. Not surprisingly, I have heard nothing but praise from the pupils for your lecture."

Felicity was wonderful – we were really pleased with her presentation and she related well to an audience that she couldn’t see. Many stayed on to ask questions at the end and we’ve had really positive feedback. It must be strange to deliver a presentation with out being able to see the audience and she did really well with that.

I’d have no hesitation in recommending Felicity to other schools looking to inspire their pupils to think more deeply about their future. The mix of science and adventuring captured people’s attentions in a different way and she concluded with some interesting life lessons.