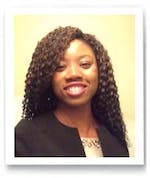 Christiana, who has been described by The Guardian as ‘truly exceptional,’ passed GCSE Maths at the age of nine. She is a Guinness World Record Holder and has just completed the Mentoring Women in Business Programme at the Cherie Blair Foundation.

Not too long after, still at the age of nine, she was honoured by the Minister of State for E-commerce as one of the youngest girls ever to receive a mathematics award and went on to write a book to help her friends struggling with Maths called 'Maths Manual' - this sold out on Amazon. She personally gave a copy of Maths Manual to Twitter Co-Founder and CEO Jack Dorsey and has been advised by Eventbrite Co-Founder Kevin Hartz to create apps and games on the back of its success. This led her to work in the Educational Technology Division of Android-Micro Chip Maker, Texas Instruments.

At 11 years old, Christiana became the youngest student in history to attend a British university – an achievement featured in Cambridge University’s ‘The Cambridge Student’ – after she was given a government scholarship to study at undergraduate level. Later that year, she received eight scholarships to the top schools in the country. At 16 she received multiple offers to study for a Master’s degree from leading Universities and also won a scholarship to study at Imperial College, London. She has worked at HSBC, Citibank and as a result was subsequently invited to the London Stock Exchange. Christiana also conducted mathematical research at Oxford University and later became a Chorister at Hertford College, Oxford. Christiana inspires students to do Maths and promotes independent learning.


Christiana is an International Speaker who has spoken to students, parents and teachers in Ukraine, leading teacher training. She has also just been named the Most Influential Woman in FinTech (Financial Technology).

"The event was a real success last week and it was a pleasure to welcome Christiana to speak. She was really thankful to be apart of the conference and stayed for the duration of the day, taking part in workshops going on. Her talk was interesting and she focused on engaging pupils and her personal love of maths at such a young age. This was inspirational to listen to. She gave the teachers a couple of resources they could look up."

“Christiana is my favourite speaker because before I didn’t feel confident in [my ability to do] Maths, but now I haven’t found a Maths question I can’t do! Even when I do find one I’m excited to give it a go as failing is part of the process.”

“I absolutely loved Christiana’s presentation on exam tips! It was really insightful… and really helped with my exams where I received multiple scholarships to the top schools in the country.”

“Without Christiana’s talk about priorities I wouldn’t have been able to support my daughter through the exam season! She spoke with such clarity and by the end we knew exactly what we needed to do… thank you, Christiana!"