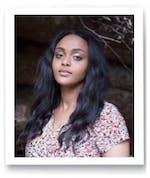 Bethel is a 21-year-old student of Education studies and a campaigner that works to inform people about female genital mutilation and menstrual health. As well as being the founder of Hidden Scars.

Bethel is the founder and director of Hidden Scars - an organisation that works to share the power of forgiveness. After going through the process of forgiving people that hurt her - including a person who sexually abused her as a child - Bethel wanted to do more work around sharing the healing and peaceful power of forgiveness.

Hidden Scars was founded in February of 2015, this project works mainly in Leeds and Northampton. It aims to work on informing professionals and students on female genital mutilation. They also work on providing disadvantaged girls with sanitary products in Leeds. This is done within schools and food banks in Leeds with education on sanitary products being an important part of the work.

Forgiveness wasn’t always the focus in Bethel’s work life. Before she went through the process of forgiveness, she was very much focused on raising awareness on an issue called Female Genital Mutilation/ Cutting. Bethel is the first person in her family to not have gone through this harmful cultural practice. The fact that her mother said ‘no’ to Bethel having FGM done inspired her to encourage others to also say ‘no’ to performing this harmful practice on their daughters. The work on FGM led Bethel to campaign on the topic for over 6 years.

Bethel is very passionate about women's rights and women's health. This is shown through her work on FGM, menstrual health and her role as the women's officer for her university. As a student of Education, Bethel is also very passionate about the importance of education and how education can be a key way of informing young people about issues that are going on as we speak.

All of this has led Bethel to share her story and raise awareness on the various issues listed below:

- Provide FGM/C safeguarding information to your students or your staff

- Information on activism and campaigning

"It was great having you in school again and the teachers all said you were fantastic with the Year 11 students."

"Bethel has co-trained FGM sessions for professionals in Leeds which has helped to give them a deeper understanding of this practice and how they can respond sensitively. Thus far attendees have given positive feedback of Bethel’s input and have felt more confident at the end of the training in how they would respond."

"Just a line to thank you so much for your excellent presentation at the start of our annual conference in Bristol last month. You did a fantastic job and everyone really enjoyed hearing what you had to say."